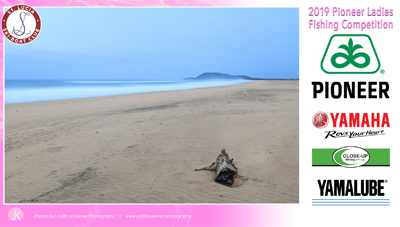 The 1st of November marked the first ever all Ladies Fishing Competition, that was held at the St Lucia Ski Boat Club.

This Competition was the brain child of Velia Tonkin and the competition was extremely well attended by more than 80 lady anglers,

some of which had never fished before. 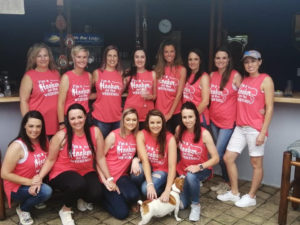 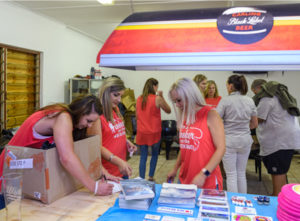 Registration and briefing was held on Friday evening the excitement and energy that was experienced, almost blew the roof off

the ski boat club, It was some thing to behold. The ladies were informed at the briefing that Saturday would probably be a blow out,

and not be fishable due to unsafe fishing conditions.

This did not dampen or break any of their spirits what so ever, the festivities at the club carried on until the early hours of Saturday morning.

Saturday morning saw a few of the ladies a bit worse for wear after a great briefing and opening function. A dress up evening was planned for

later that day and the ladies went all out and never held back on any detail. 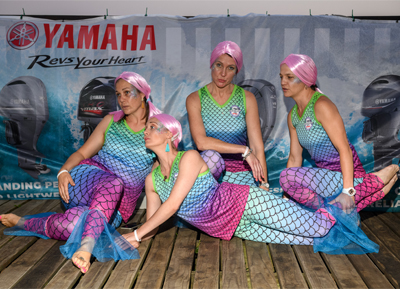 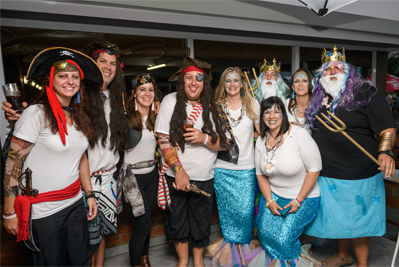 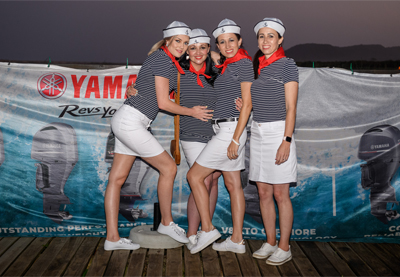 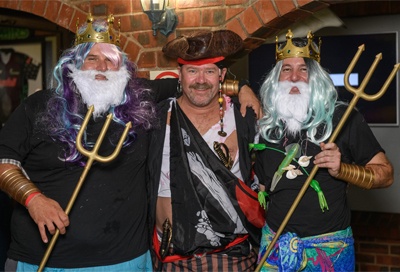 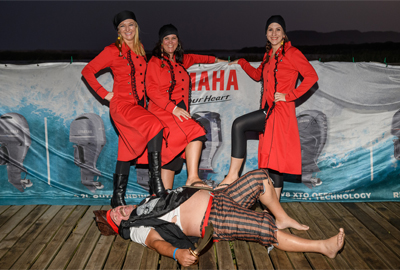 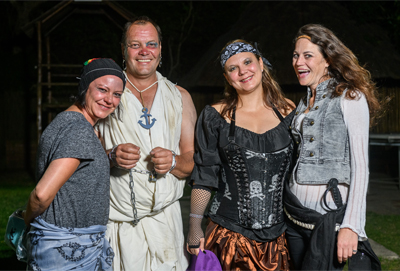 Sunday morning dawned and the weather was ideal, but nothing was holding these ladies back today. They were enthusiastic and ready to tackle what ever the day

threw at them. At first light they began launching the boats, all the boats made it safely behind the backline with some of the ladies having a bit more excitement than others, 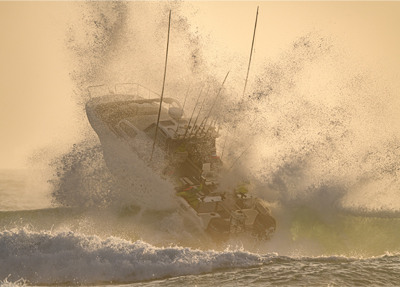 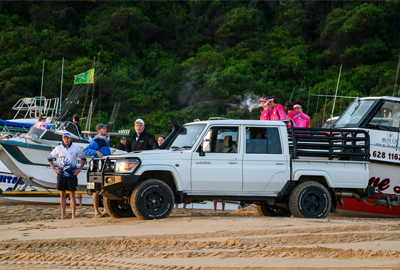 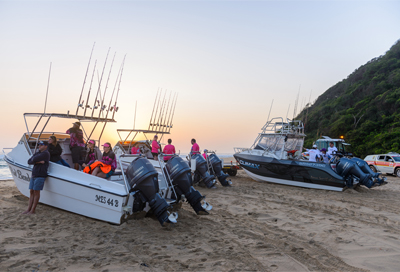 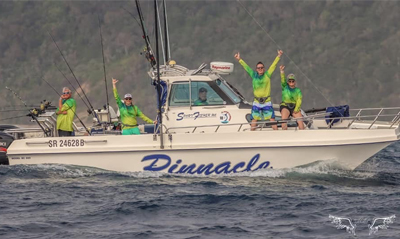 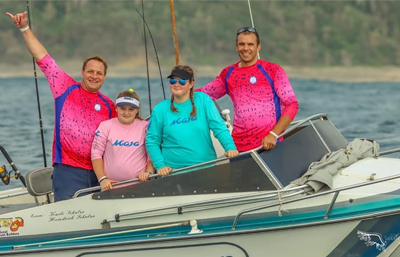 and they were on their way to get some serious fishing done on the last and only day of the competition. The sea conditions were not great, but this never deterred the ladies in

any way. They put in a full days fishing in less than perfect conditions, and some great catches were recorded by the ladies. Some of them even managed to catch and release

their first sailfish, which is a great achievement and the excitement could be seen at the weight in. The scales closed at 15:00 and everyone pushed their fishing time until as late as possible, to

make the most of their time on the water. 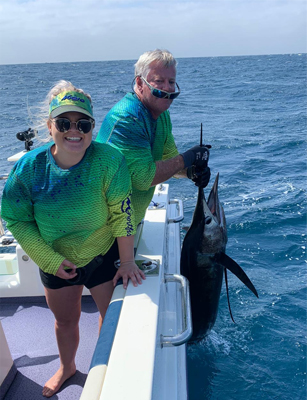 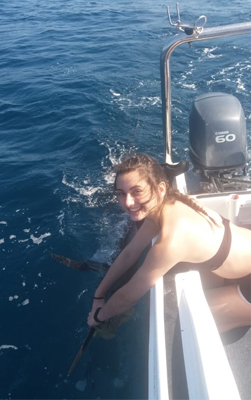 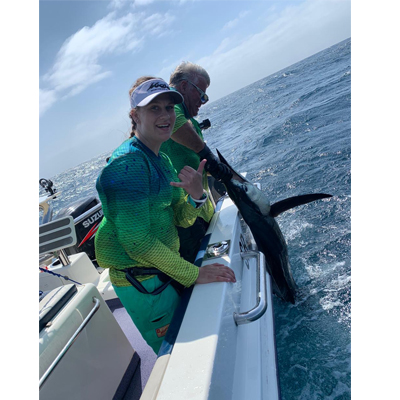 Weigh in saw all the anglers with fish to be weighed, eagerly waiting to see if their catch would win them the prize for the most meritorious game fish of the day.

Scales closed and weigh in came to an end, scores were tallied and positions were decided according to points. Prize giving and closing function was set to get underway

later that evening. Skippers and crew went home to get ready for prize giving, all the teams arrived back at the club and the atmosphere was uncontainable.

Prize giving began and everyone was excited and on edge to see who the first winner of the Pioneer Ladies Fishing Competition. 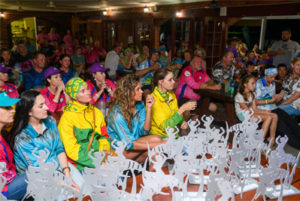 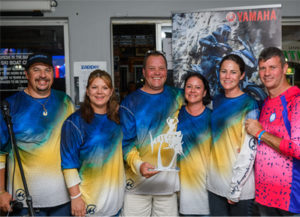 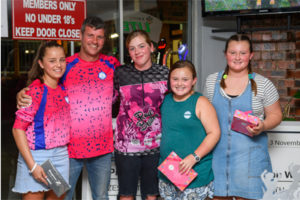 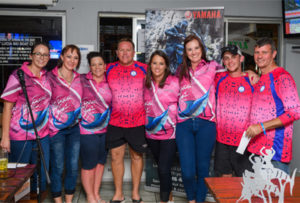 The announcement was made and the winners of the first Pioneer Ladies Competition were:

and the most meritorious fish for the competition on day 2 went to Chantelle Megan Coertzen, she was the winner of the R25 000,00 sponsored by Close Up Machinery. 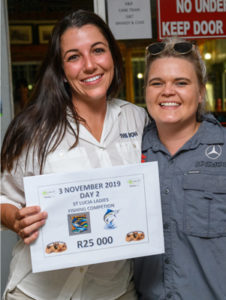 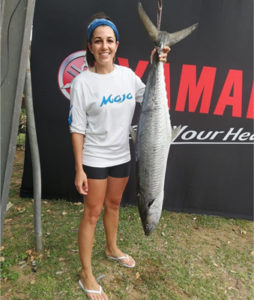 Memories and new friendships were made among all that attended the competition. Well done to the St Lucia Ski Boat Club on yet another well organised and run

We are looking forward to seeing you all again next year. 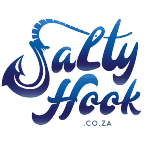 “Dredge fishing for pelagic fish started in 80’s when a few captains in South Florida got the idea of emulating a bait ball by stringing up a bunch off mullet on a homemade dredge bar. The technique was so effective that is was said that Capt Chip Schaffer would rather cut off his dredge than give away his secret to oncoming competing boats.  As with most fishing secrets the word got out and soon after boats all up and down the sailfish circuit had made the switch to trolling mullet dredges for sailfish.  Today dredge fishing is almost a staple for all fisherman targeting billfish on the sailfish circuit”.

This is the answer I got from Bill Pino when I asked where it all started during a tournament in North Carolina. I was introduced to dredges the first time fishing for white marlin and sailfish off North Carolina and Dominican Republic. At first I thought what are these guys doing they going to scare my fish away but soon realized the fish tended to come up behind the dredges every time. I immediately started investigating this new phenomenon that was called a dredge and will it work in South African waters. I was put into contact with Bill Pino the modern day father of artificial squid dredges and the owner of Squidnation. The growing popularity of artificial dredges has made it a popular option for most lure fisherman targeting bill fish.

The idea is simple. Troll a bait ball behind your boat and marlin and sailfish will appear to eat the bait ball. Pull it away from them and they need to eat something. The fish will switch from the ball that mysteriously disappeared to you trolled baits or lure.

Most dredges are single, double or triple tier stainless steel dredge bars and slow trolled between 4 and 6.5 kts (7.5km/h and 12km/h) about 15 to 21m  behind the boat. Various weight options from 1kg to 2.7kg  rigged on a cable (Picture 1) in front of  the dredge to get them far enough below the surface that they don’t pop out of the water but still shallow enough that they can be seen by the anglers (Pic 2 and 3) . If you can’t see the dredge you can’t see the fish behind it and the fish can sit behind the dredge for a long time until it losses interest.

There are many reasons for this progression to artificial dredges.  Bait availability, speed of trolling, cost, preparation time and ultimately effectiveness. We just don’t have the bait in South Africa so the artificial dredges is the only option for us. Good halfbeaks can be scarce and anglers would prefer to use them for hooked baits. The use of artificial dredges also allows you to troll faster.  Squid dredges can be pulled as fast as 9kts (16km/h) when hunting for bait balls and billfish. Squid Dredge, mudflap dredges and shad dredges give the angler lots of choices on shape color and sizing.

With the advancements of dredge cams most of the assumptions can now be proved now you can see what is actually happening. So many videos show a billfish rising up to an artificial dredge and slapping at it once and go straight to a bait.

So dredges raise billfish. But does it work in South Africa. Yes it does as can be seen in the results from the past few tournaments where the top boats where all pulling dredges. In the last OET both the top two boats Hotline pulling a Pulsator dredge and Jean Mari pulling a Squidnation dredges raised most off the billfish behind the dredges.

When asking skipper Japie Kleinhans and crew member Nick Nel from Jean Mari does it work both replied for sure. We raised bill fish every day except the f*?#! day my crew left the dredge on the side.

Now this all said and done how do you pull a dredge from a skiboat was the next challenge. We don’t have that type of boats are usually the first answer you get. Wrong you can easily rig a complete electric dredge reel from a skiboat (Pic 4 and Illustration 1). If you don’t want to invest in an electric reel use an old 80lb setup that would work just as good as seen in Illustration 2. 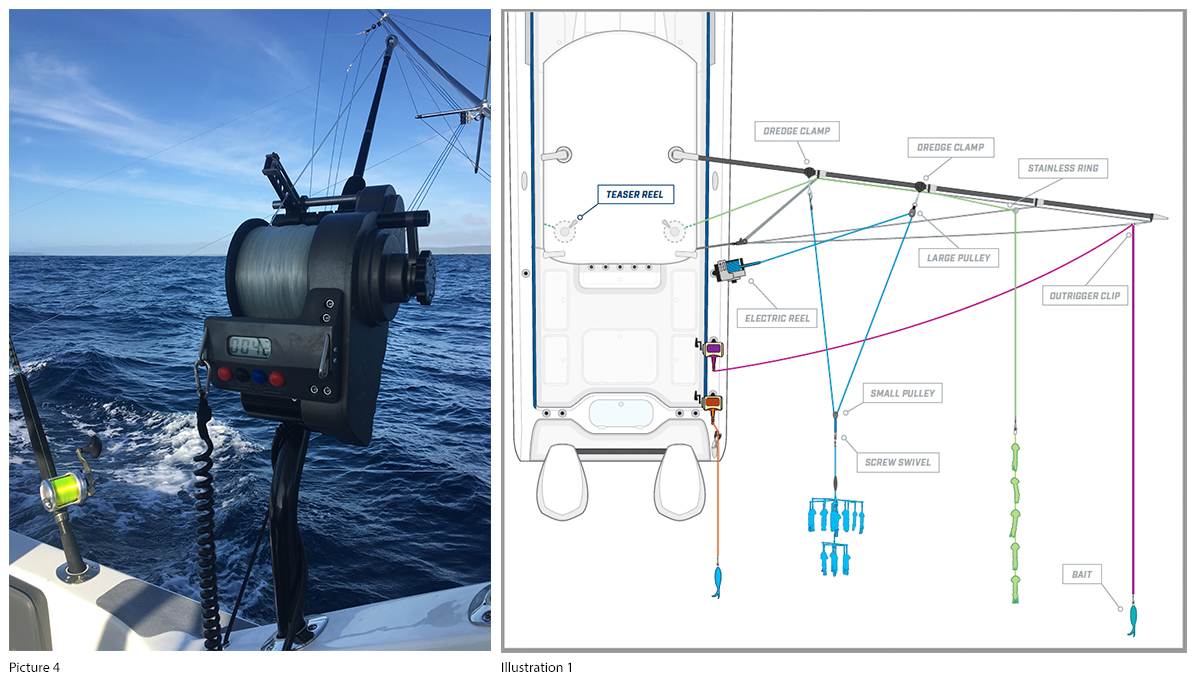 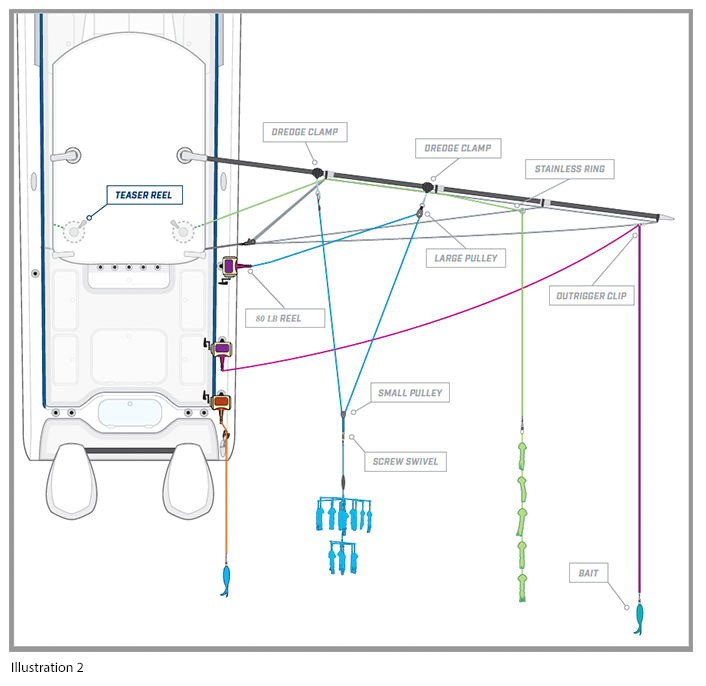 If you feel your riggers are not strong enough you can use a dredge boom as shown in Pic 5 and Illustration 3. This is an independent boom that can be placed in your standard 30 deg rod holder in the gunnel of the boat. This will take the dredge out to the desired position without straining your riggers. The setup uses the same snatch pulley system. 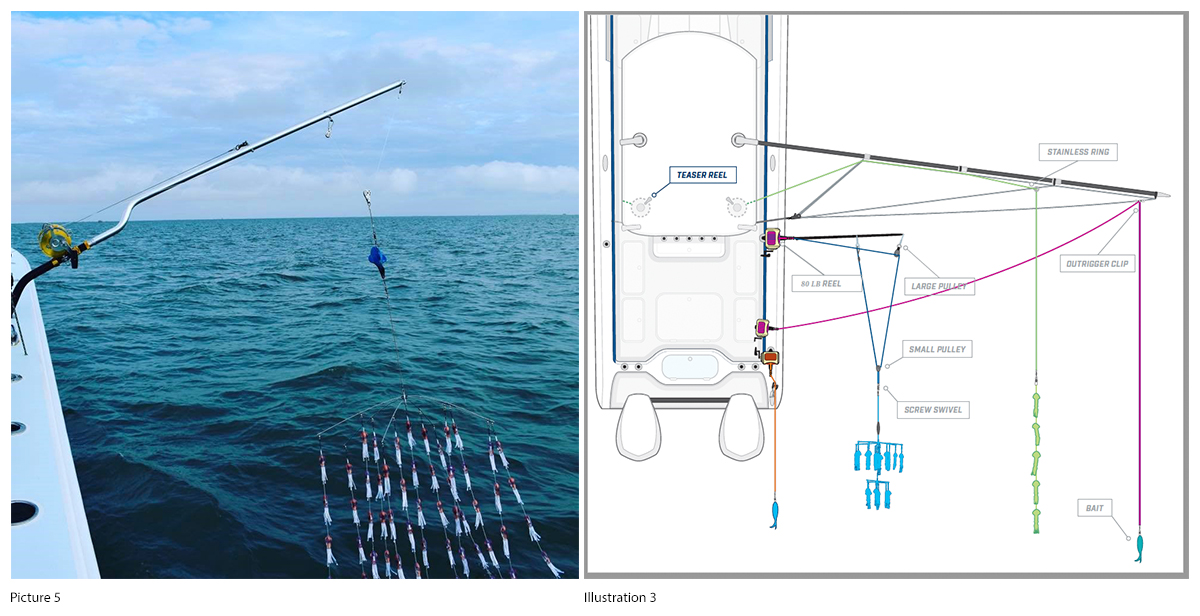 Always inspect the swivel and the cable before you put the dredge in the water as 90% of dredges are lost between the weight and the dredge due to swivel failure.

You should now be set to go to have a successful dredge fishing setup.